The satirical novel O, Wow — by yours truly — is set in a near future. At the outset, the wounded psyche of its lead character, a comic named Peter Dooley, is overwhelmed by an experimental technology.

Originally developed for battlefield communications, the nanobiotic neural “boost” had been repurposed — too hastily, it seems — to serve public relations efforts during a national emergency. Dooley and his former partner, both imbued with the enhanced telemedia system, which links psyches via maxnet wifi, became able to work in vastly accelerated and exquisitely synchronized production of mass-persuasion spots: live, ad hoc, online, with real-time response to ongoing polling data. 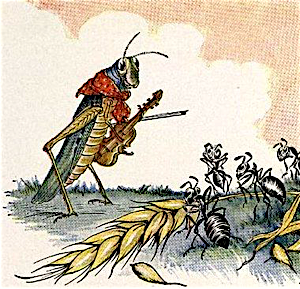 Their comic skits updated an old fable of encounters between an erratically profligate Grasshopper and a stoic, hardworking Ant, reinterpreted to exigencies of the moment. Their episodes were meant to help stave off economic disaster. Even so, cascading calamities subsequently unfold as hordes of people move out of cities made inhospitable by devastating hurricanes, amid gathering rumors of nuclear bombs to be unleashed by terrorists. Along the Atlantic Seaboard entire urban neighborhoods empty into wary and hostile rural communities beyond.

Grasshopper personally disparages, but tolerates, most fellow travelers as “Ants, — phooey!” Nevertheless, he fascinates and draws them into unlikely escapades where some become infected with his auto-sustaining, ever renewing, nanobiotech. They become the core of a Grasshopper band, at the center of a traveling swarm of displaced evacuees from Gotham Seaboard. 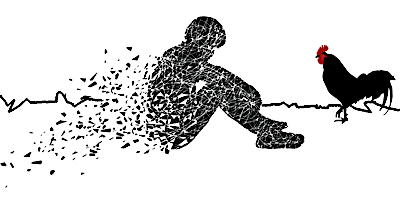 Following an hallucinatory encounter with a ditch bank and a rooster, Dooley’s native persona slowly recovers itself within lingering rhythms of Grasshopper’s on-going “hoppening”. A hyperlinked, eerily telepathic, commune emerges among his equally tech-infected companions. Like him, they seem drawn to collective perches up in trees. They gather about their Gadfly of Antdom to exult in a gathering of effusive energies. Conjoined imaginal experience sighs in a cosmos-embracing sentiment: “One world, one way.”

While its intended meaning is not spelled out in the novel — despite the title being an acronym of that very phrase — I have come to regard it as the Grasshopper band’s enthused summation of their own mutual awareness. Individually, they have arrived at a momentary pinnacle of common evolutional prospect, where they exult in panoramic elaboration of possibilities among all living beings. 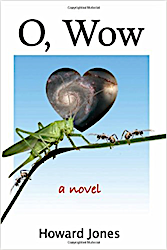 [Said by Midwest Book Review to be “endlessly entertaining and recommended”, O, Wow is available in paperback here and here; and as an ebook here.]

The late modern era, at C4, builds a unique common sense notion of reality rooted in many personal experiences socially expressed through a rich heritage of media technologies. Gathering psychic and cultural constituents from a range of precedent-setting forebears, C4 empirical reality manifests out of legacies of earlier social and cultural elaborations of pragmatic paradigm, or, notions of how the world works. Such common notions — pragmatic paradigms — emerge from social communication, enabled and constrained by available methods of interaction, especially the unique qualities of specific media and other transactional technologies. Note that C4, an exemplar of print and analog media, does not simply displace earlier modes. Rather, memes of earlier realities are reinterpreted and incorporated into the currently dominant mode. Precedent cultural patterns are adapted and reworked to suit the more complex dynamic that subsumes them. (See the table Evolution of Cultural Orders, below.) 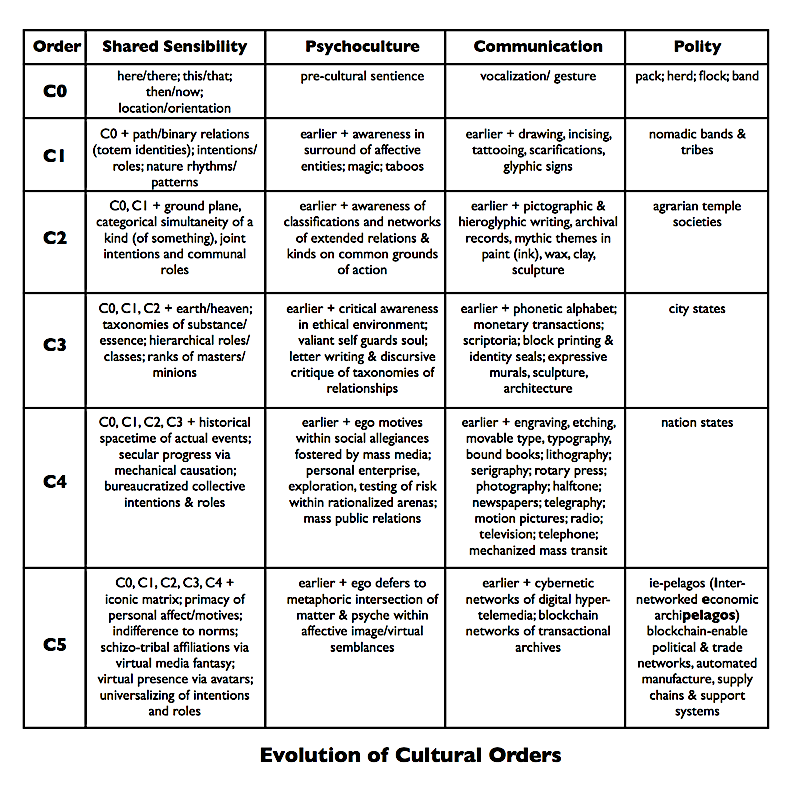 Consequent elaborations of C4 accomplishments now open into iconic dawn, at C5, where visual immediacy enabled by digital processing occasions a spontaneity of responsiveness that had been impractical in the preceding print-anchored era. The most recently dominating, although not the only, influence of earlier C4 reality might be its celebration of natural cause.

This core idea first flowered in 16th century Europe from where it aggressively spread across the planet. Its empirical root fostered new prospects for communications and transactional technologies that first sprouted and then flourished in commerce among competitive empires. Once novel, even heretically curious, habits of practical thought (in the Middle Ages, for instance, as portrayed in Umberto Eco’s The Name of the Rose) and resultant behaviors now daily motivate and guide personal and collective events around the globe.

But our own time, in the twilight of C4 and just now glimpsing promise of C5, seems transitional, between paradigms. The question that hovers is “Must we yet again endure a night between?” 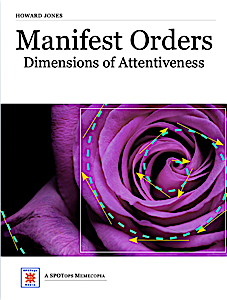 Earlier implementations of social accord have grown unworkable at many levels, especially if one regards harmony and productivity as jointly crucial criteria of cultural wellbeing. As discussed more fully below, and elsewhere in Steemit posts that support an ongoing project, Manifest Orders: Dimensions of Attentiveness, a new organic view beckons.

In The Coming Caesars, published in 1957, Amaury de Riencourt argues that seeds of C4 Occidental culture were first planted about 1000 AD. They were sown in the wake of C2 Gothic invasions of decadent C3 Hellenistic civilizations. But C4 now, in our post-modern era, seems to be in ebb. If so, then here, sixty years after that publication, we find ourselves at the end of one millennial era and somewhat prior to the next.

Such inter-millennial transitions typically are tumultuous. Confusions become pandemic as familiar patterns no longer are honored or even tolerated. Frustration quickly grows into vengeful bouts of social retribution. Masses of frustrated individuals, disillusioned by diminished opportunity and fearful of “invading aliens”, clamor for a strong champion, a Caesar, as they were called during a similar phase of the ancient Roman era.

Sound familiar? If it does, says de Riencourt, it is because our receding millennium is subject to the same evolutional patterns that shaped the rise of other great cultures. Our departing halcyon days now decline, either through stages, gradually, or suddenly into destabilization that perhaps builds to extremes of civil disorder. Each great civilization — Occidental, Oriental, Meso-American — has differed in its own particulars of locales, prospects and forms. But each has proceeded through organically similar phases, from beginning, through middle, to end.

[By the way, be aware that due to lapse of the original copyright, a later interpretation of de Riencourt’s book that claims dual authorship also is available under the identical title. I am not familiar with that derived adaptation; my comments are addressed solely with regard to the original as penned by de Riencourt himself.]

As further considered below, according to William Powers’s Perceptual Control Theory (PCT): people individually behave to bring their perceived circumstances into agreement with their expectations and intentions.

Consideration of individual motives within human society suggests that, among groups, personal behavior is driven in compensation of perceived deficiencies, coupled with eagerness to repay grief in kind and with interest. Such proclivities do not bode well for any civilization within which individual frustrations massively build.

People interact and transact in social groupings. Those whose communication is only spoken or gestured (among subgroups operating at C1 and C2, such as street gangs and the urban and rural impoverished classes) are capable of far less elaborate realization of possibilities than those attained among more media-facilitated individuals. Those who wield books, computers and inter-networked smart phones tend to forget propensities of frustrated ambitions at less complex pragmatic realities.

Where a great mass of a populace is unable to participate in intricate institutions and protocols of social process, threat of mayhem gathers. All such interactions and transactions, both intra- and inter-group, within a society are profoundly shaped by communications and interactive media available to them. (Those who disagree must be prepared to explain the prosecution and outcome of the 2016 US Presidential election without Facebook and Twitter operating across a global Internet.)

Earlier transitions between cultural eras typically have fallen into ruinously "backward times" called Dark Ages. Whether our kind, yet again, shall pass through a valley of the shadows of our own animal natures is yet to be seen. And if so, just how savage folks may become shall be determined largely by how they come to regard one another. And how they behave as a result. The possibilities range across a spectrum: